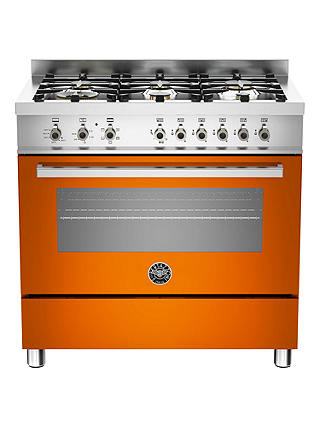 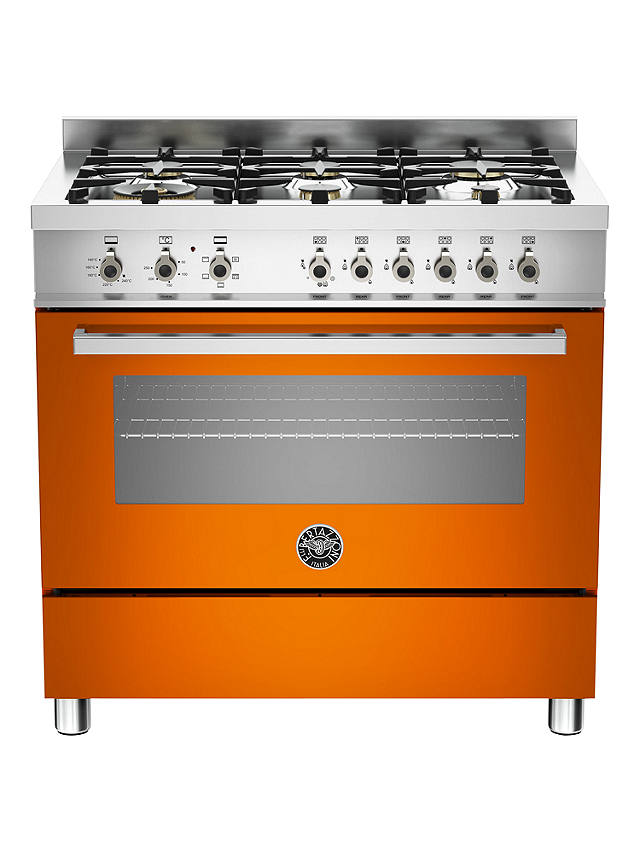 Bring great versatility to your kitchen with the Bertazzoni Professional Series 90cm Dual Energy Single Range Cooker. This single oven range cooker has a hybrid gas and electric oven for greater cooking flexibility as well as giving you greater control over how much energy your cooker uses. You can also inject some added personality into your kitchen interior by bringing a splash of colour to your decor. This cooker is available in a wide range of bright colours so you can pick the one which best matches your personality.

Energy efficient
Now is the time to take control of your rising energy bills. The Professional Series Dual Fuel Twin Range Cooker has been awarded an A energy efficiency rating for when the oven is running on gas and B rating for when its electric, meaning it will help you use less energy and ultimately pay less on your power bill. Enjoy extra energy efficiency thanks to triple-glazed glass doors which minimise heat loss.

Cooking power
With a whopping 123 litre capacity, this cooker will easily deal with any culinary task you may encounter. Cook a huge range of dishes with modes ranging from convection heating and baking to grilling and warming. The oven has 6 different cooking functions while a balanced air-flow ensures heat distribution is even throughout the oven.

The gas hob has six burners, including a dual wok, rapid, auxiliary and 3 semi rapid sizes that let you prepare multiple dishes simultaneously, and can offer everything between a gentle simmer and full boiling power.

Thicker glass in your oven door means more heat is contained inside and keeps the exterior door surface cool to the touch.

Lets you see the food cooking

Number of shelves or racks, as well as details such as rotisserie, adjustable racking etc.

The number of separate oven cavities in the appliance. Note that the different cavities may have different size, configuration and features

The rate of gas consumed by the appliance

Bertazzoni appliances are engineered and built in Guastalla, close to Parma in Emilia-Romagna. This is Italy’s heartland of food and cooking.

The region’s superb culinary heritage is led by its prized produce such as prosciutto di Parma, salami and mortadella, varied and delicious pastas, Parmesan cheese and balsamic vinegar. This is also the home of world famous sports cars and racing motorbikes, machine tools and agricultural equipment.

The company was founded in the late 19th century when Francesco Bertazzoni saw wood burning stoves arrive in his home town on the new railroad connecting to the industrial north. He and his son Antonio decided to make their own stoves like these. They were soon a success and before long the Bertazzoni name become known across Italy.

The family built their first factory in 1909, and expanded again in the 1920s. After the upheavals in Europe of the 30s and 40s, the 1950s saw the start of a period of sustained growth. The first Bertazzoni gas table top hobs units were introduced in 1953. These were followed by gas stoves, further perfected in 1958 with the addition of an oven.

Overseas markets expanded over the following years – in Europe first then the Middle East and Pacific. Bertazzoni started selling in North America in 2005. Today the company uses advanced manufacturing techniques adopted from the automotive industry.

These involve minimal stocks, streamline flows, and reduced lead times. Production in large modern plants has doubled since 1998. With new models added regularly, Bertazzoni continues to set the style of modern cooking. With the imaginative details and good looks for which Italians are renowned, a Bertazzoni inspires all the delights of good living at home.