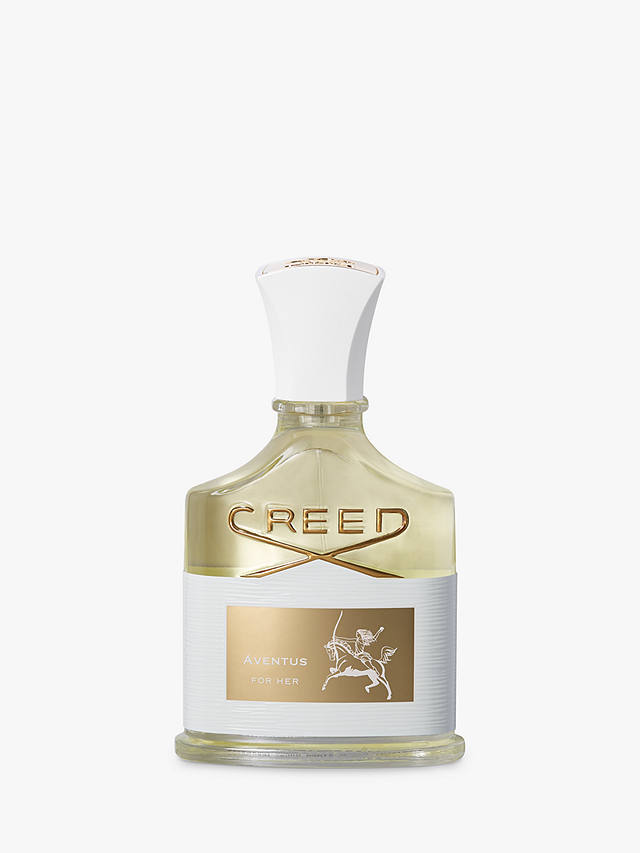 Aventus for Her marks the irresistible feminine counterpart to the legendary Aventus. Inspired by history's most powerful women - from royalty and visionaries to artists and writers - whilst heralding the strong, modern woman of today.

Opulent and sensual, this fruity floral scent opens with accords of crisp green apple blended with fragrant pink pepper and sparkling Calabrian bergamot. Aventus for Her blossoms into a magnificent ?oral heart of dewy rose, exotic sandalwood with a irresistible base of amber, ylang ylang and peach.

In an era when the fragrance industry is dominated by globally advertised fashion and celebrity brands, it comes as a refreshing surprise to discover an authentic family-owned perfume house dedicated to the creation of highly original fragrances of extravagant quality and inspiration. This unique story began in 1760. A pair of scented leather gloves was delivered to King George III by a new London tailoring company. Founded by James Henry Creed in the same year as the young King's accession, the House of Creed has created fragrances for the discerning and the discriminating for over 260 years.
Queen Victoria - George III's granddaughter - appointed Creed as an official supplier to the Royal Household. Then, in 1854, under the patronage of Napoleon III and his Empress, Eugénie, the stylish leader of European fashion, the House of Creed moved its headquarters to Paris. Victoria had praised Creed only too well to her fellow Sovereigns. In newly rebuilt and glittering Second Empire Paris, Creed embellished its reputation for impeccable tailoring and for the exclusivity of its rare and limited House fragrances. The tact and discretion with which a royal, aristocratic and socially prominent clientele were handled rapidly became part of the Creed legend.
Creed has created a legacy of unrivalled scents treasured by perfume connoisseurs and all admirers of quality, style and panache. Over the centuries, the Creed family has produced over 200 perfumes all testifying to a unique creative spirit that has been passed, together with a keen inherited nose, from father to son through seven generations.
Today Olivier Creed, “Créateur Parfumeur” and direct descendant of James Henry Creed, continues this great tradition. Accompanied by his son Erwin, Olivier travels extensively to source, research, inspect and commission the finest materials. Rose from Bulgaria, Turkey & Morocco; Italian jasmine; Florentine iris; tuberose from India; Haitian vetiver; Bourbon vanilla; Calabrian bergamot and Parma violets. These are just a few of innumerable treasures in the Creed laboratory. They are all ingredients which have been used in haute parfumerie for many centuries, even millenia. Still based at Paris, with a factory at Fontainebleau, Creed manufactures many of its own essences using a traditional infusion technique – a process now abandoned as too costly by the modern perfume industry, but one which enables Creed to maintain the superior quality and authenticity of its fragrances. The raw ingredients and the resultant perfume are still weighed out, mixed and macerated by hand. The process is laborious, painstaking and labour intensive but Creed is driven by artistry and perfection, not by commercial priorities.
A timeless, modern act of creation: perfume of the past, fragrance of the future.
More from CREED