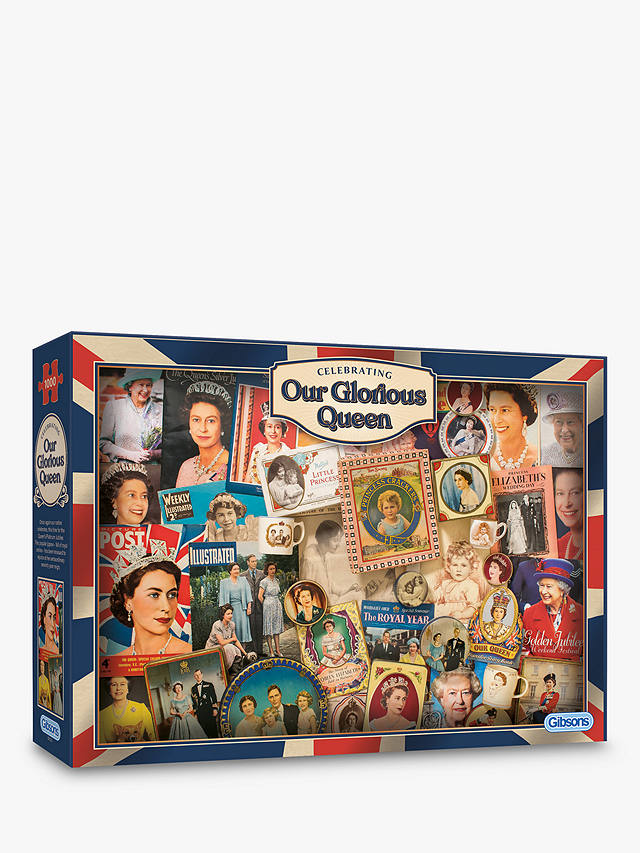 Once again our nation celebrates, this time for the Queen's Platinum Jubilee. This popular jigsaw - full of royal smiles - has been reissued to rejoice at her extraordinary seventy year reign. As the longest serving British head of state and the world's oldest reigning monarch, our amazing Queen is possibly the most photographed person in history. In This jigsaw we see her many expressions - regal, joyful, intrigued, thoughtful, happy... and glorious.

The Queen was born on 21 April 1926 and was christened Elizabeth Alexandra Mary Windsor. The young princess immediately became the centre of public attention; the first photographs appeared in the press four weeks after her birth. Even though she was not in line to become queen, the image of the little princess appeared on ceramic souvenirs, chocolate boxes and even a Christmas cracker box lid. Winston Churchill described the two-year-old as having "an air of authority and reflectiveness astonishing in an infant." The Duke and Duchess of York has a second daughter, Margaret Rose, born in 1930. As the two princesses grew up, so did the public interest, and they were frequently seen on magazine covers, jigsaws and tins for biscuits or sweets. When George V died in 1936, Edward VIII became king, but not wishing to reign "without the woman he loved" (Wallis Simpson was an American divorcee), he abdicated. His younger brother the Duke of York therefore became King George VI, a role for which he was not prepared. Princess Elizabeth now knew that one day she would be queen.

By the time of the Second World War in 1939, Princess Elizabeth was 13 years old and learning to be queen. In 1947, aged 21, she married Lieutenant Philip Mountbatten who became known as Prince Philip, Duke of Edinburgh. Their first son, Prince Charles, was born a year later. When her father George VI died in 1952, Queen Elizabeth II became monarch, announcing that she would do her duty as sovereign. Her coronation was held at Westminster Abbey in June 1953; it heralded the dawn of a new era following Britain's recovery from years of rationing and austerity. The spirit of the nation was lifted as two million people lined the procession route and twenty million more watched on television, huddled around their neighbour's newly purchased TV set. Since that time, the Queen, with Prince Philip by her side, often toured the Commonwealth, America and many other nations. During the Silver Jubilee year of 1977, they travelled some 7,000 miles around Britain. This was a moment when the nation was in a festive mood, despite the economic troubles. Thousands of street parties were held, with trestle tables laden with red, white and blue cakes and jelly - a tradition that continued for the Queen's Golden and Diamond Jubilees and now in 2022 for the incredible milestone of her Platinum Jubilee for which there will be four days of celebrations.

Throughout her reign, the Queen has remained steadfast to her commitments of duty and responsibility - even since losing her beloved husband of 73 years, the Duke of Edinburgh, who died in April 2021.

A high quality 1000 piece jigsaw puzzle made in the UK from thick, durable board that is 100% recycled. Puzzle dimensions: 48x68cm. Comes with a print-out of the puzzle image which is beautifully designed by Robert Opie.