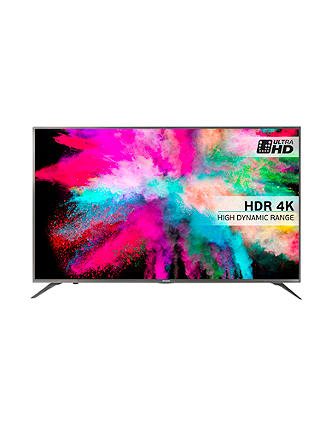 Enjoy a compelling picture quality with colour-boosting HDR on the Hisense 50M5500. Backed by four-times the resolution of Full HD, this 8-bit has the ability to play programmes and movies in a beautiful High Dynamic Range. Furthermore, with the brand’s state-of-the-art Smart platform, you’ll be entertained with apps such as Netflix, Youtube and Wuaki.tv. And if you have an Android smart device, you can beam content directly onto the big-screen using AnyView Cast.

HDR support
With its 8-bit panel, the 50M5500 can show over a billion individual colours to deepen your view and shows shades you’ve never seen in home entertainment before. The source content needs to be HDR for you to fully appreciate the picture, but here lies an element of future-proofing a new era of television.

Quad-Core smart platform
This set’s Hisense Smart platform is ran by a rapid quad-core processor, so you’ll browse seamlessly. Do anything from stream shows on Netflix and Amazon, keep up with the weather on Accuweather or play clips on YouTube. Other apps included Wuaki.tv, Plex, Facebook and Twitter.*

AnyView Cast
With AnyView Cast, you can mirror content on your Android smart device onto the TV. You could show holiday snaps to guests, play games on the big screen or continue watching movies from a commute – the possibilities are endless. Please note that this feature doesn’t work on iOS devices.

Perfect partners
With TVs getting slimmer and built-in speakers getting smaller, choosing the right sound system is more important than ever. Soundbars enhance your TV’s sound quality and add that extra audio punch to all your movies, games and TV programmes. More affordable and easier to set up than a full size speaker system, they don’t compromise on quality either.
Take a look at our full range of soundbars.

Don't forget...
If you want to connect your TV to a blu-ray player, games console, soundbar or soundbase then you'll need a HDMI cable.
View our collection of cables & connections

And if you’re looking to elevate your viewing experience with cable management, then why not take a look at our wall mounts and TV stands.

Delivery information:If you buy a sound bar or DVD/Blu-ray player along with this TV, please note that they'll be delivered separately.

Internet enabled devices allow you access to a wealth of online content through Wi-Fi, dongle or Ethernet connection.

NO
Number of tuners

These are built-in the TV to access digital television channels, radio stations or even HD channels at no extra cost

Determines the interface you see on screen and the types of programmes you can run.

Estimated energy use for a full year's use, based on EU regulations

Amount used when on standby, based on EU regulations

The number of times the screen is refreshed per second - a higher number can result in a smoother image. Please note, manufacturers may use their own measurements for refresh rate, so these may not always be comparable.

Connects to the home Wi-Fi to access apps including BBC iPlayer, stream from services such as Netflix and browse websites

The angle from which the display is clearly visible with no loss of image quality. Higher figure will ensure more people seated around the display will be able to view it clearly

4K Ultra HD | also referred to as 4K and UHD, delivers four times the pixels of a Full HD screen to display unprecedented picture clarity and detail, even close up

4K Upscaling | boosts standard definition and high definition content to a near 4K ultra-high definition picture quality. Upscaling is a process through which a lower resolution signal or data source is displayed at a higher resolution. The upscaling process interpolates additional pixels from the source data, and produces a clearer picture on your 4K screen than a non-upscaled image.

LED | LED-backlit TVs feature hundreds of small LEDs (light emitting diodes) to create a thin, light weight and energy efficient TV. This is perhaps the most common screen type on the market

Smart TV | streams online content through your home network to bring you access to digital content such as On Demand, and streaming services from the internet such as apps

Freeview Play | Brings live, catch up and on demand TV together in one place. Find programmes from BBC iPlayer, ITV Hub, All 4, Demand 5 and UKTV Play alongside 70 digital channels and 15 HD channels. All for free.

Wi-Fi | allows TVs, smartphones, computers and other devices to connect to the internet and communicate wirelessly

DLNA (Digital Living Network Alliance) | comprises consumer electronics manufacturers who have created an industry-wide standard to enable devices to share media, such as videos and photos, over a home network

WebOS | an operating system for LG's Smart TVs which features a multitasking interface, efficient response time, simple and intuitive setup with access to some of the best catch-up TV, movies, sport and music services