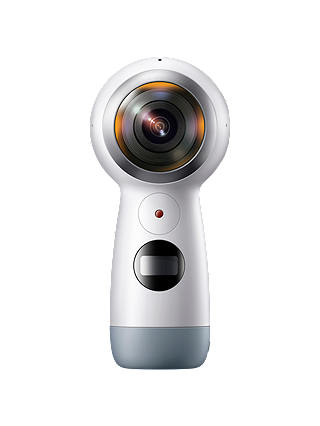 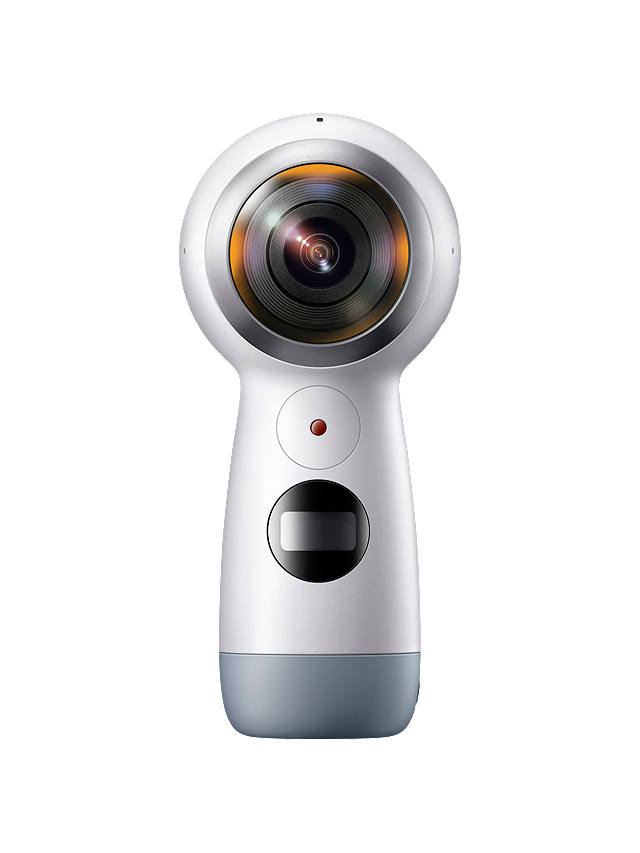 Capture life in amongst the action, in incredible 360° perspective, with Samsung’s Gear 360 2017 camera. It's compatible with Android, iOS, Windows and Mac, so you can pair up with practically any device. Or relive the action on your Gear VR Virtual Reality Headset for the total immersive experience. Live stream your 360 life to friends and family: with in-built Bluetooth and Wi-Fi it's never been easier to share your amazing footage on social platforms, or customise your content into a unique masterpiece with the Gear 360 app. With a new sleek and slim handheld design, and rugged build, it's an effortless and exhilarating joy to have the Gear 360 filming at the heart of your adventures, anywhere.

Awesome 360 View
The Gear 360 2017 uses two Bright F2.2 lenses, front and rear, which each capture 180 degrees horizontally and vertically, creating a flawless 360° field of view in amazing clarity. And if you want a more conventional shot, you can still use one of the cameras on its own for a wide-angle video or still image.

Seamless Connection
Able to pair with an expanded range of technology you can enjoy your footage on an Android (v5 or later) or iOS (v10 or later) smart device, a Windows PC, or Mac. Connect by Bluetooth and use Wi-Fi direct to transform a phone’s screen into a remote viewfinder, and to transfer your finished files.

Handheld Design
The 2017 model has been redesigned for supreme handheld use. At just 130g, it's lighter, smaller, and effortlessly portable, with a sleek and slim grip that makes it comfortable to capture the action anywhere. The grip also doubles up as a stand for a sturdy base for your shooting. Dust and splash resistant, it’s built for the outdoor life, so you can take it with you and record your adventures like never before.

Share & Edit Amazing Moments with the Gear 360 App
Live streaming has never been easier; link it up with your device, choose a social platform and share your amazing moments with friends and family. The Gear 360 app helps you turn your footage into a unique masterpiece. Choose from multiple viewing modes when taking a 360° video, and stretch and bend your content with ease. You can even create more depth or mix up the mood by adding logos, stickers or over 20 filters to your 360° photos. And it’s simple to convert your content into a standard video format when it’s ready to share.

Virtual Reality cameras can film in 360°, resulting in panoramic videos perfect to experience with VR headsets like Google Cardboard

Can connect to a compatible digital camera to print without the need to use a computer.

Measures the lens' light exposure. This affects the depth of field (the distance beween the nearest and furthest objects that can be kept in focus)

A memory card slot allows you to transfer photos and files directly from a memory card. Please check that the slot type is compatible with your memory card type

Enlarges video captured by the optical zoom and makes it seem even closer. This involves zooming in on an existing image, so it gives slightly less detailed results than an equivalent optical zoom

Allows you to zoom the image closer to the subject. Optical zooms feature physically moving lens components, so it maintains the image quality as you zoom in. Digitial zooms essentially crop an existing image, so may lose image quality as they zoom in