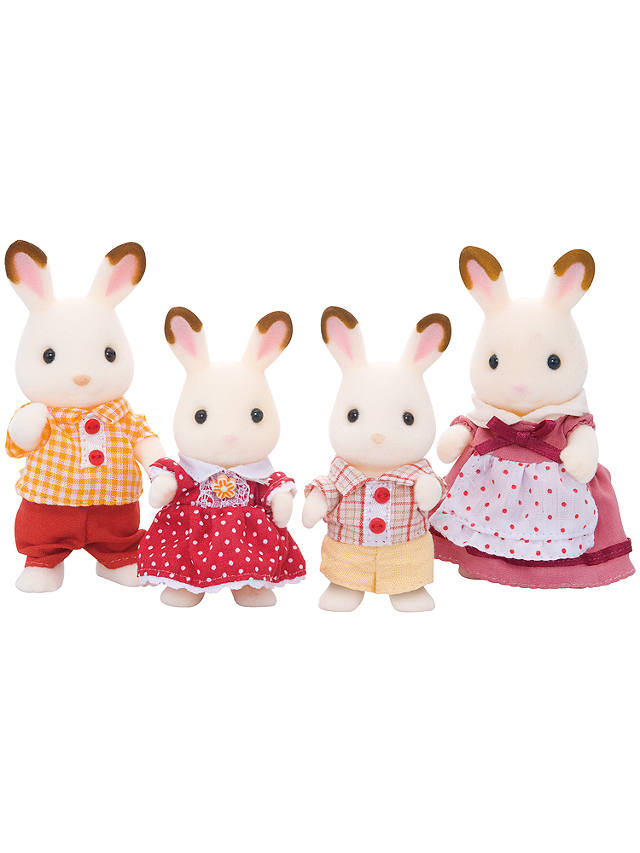 Meet the Chocolate Rabbit family from the wonderful woodland world of Sylvanian Families! The four friendly figures in this set are the father, Frasier Chocolate, mother, Teri Chocolate, and children Coco and Freya. With beautifully detailed faces and fur and adorable outfits in bright colours, this cheerful happy family is a perfect start to your Sylvanian Families collection.

All characters are grouped into families, with the company starting out with woodland creatures, before expanding into more domestic animals such as cats and dogs, as well as obscure ones such as penguins and meerkats.
Their world is set in the 1970s era, with most families being of a rural lower-middle class. Many inhabitants own successful family businesses or have professions such as teachers and doctors.
They started production in 1985 and were released in Japan and North America only. However, by 1987, their success ensured them to travel overseas to Western Europe. By 1988 they were a runaway success, even having their own animated TV show.
The range did experience a slight dip in popularity come the end of the 1990s, being discontinued in the UK. But it was soon revived by Flair and in 2007, they celebrated their 20th anniversary with a bang.
More from Sylvanian Families