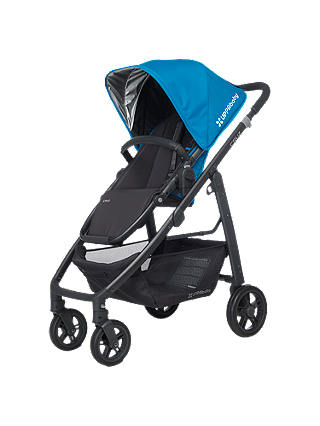 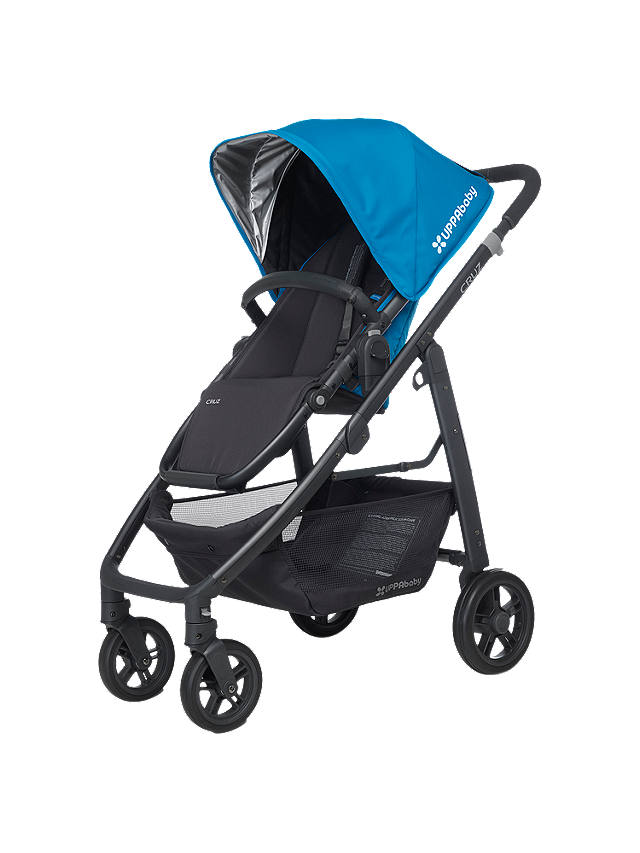 The sleek and streamlined Uppababy Cruz pushchair has heaps of practical features while never sacrificing on style. It’s suitable from birth with the UPPAbaby universal carry cot (sold separately) and can be used as a travel system with the addition of an appropriate infant carrier.
The adjustable seat is suitable when they reach 6 months old and can face you for maximum interaction or face outwards so they can look out at the world. The seat is easily adjusted with one hand and has five reclining postitions as well as a moveable footrest so they’ll be comfy where ever they go. The high seating position allows your child to eat at the table with you from their pushchair.
The four wheel suspension ensures a smooth ride at all times and won’t be disturbed when they need a snooze. The lighweight aluminium chassis has easy fold technology and can be folded with the seat unit in place (when forward facing). For extra tight spaces, simply remove the wheels using the quick release technology to make it even more compact. The front swivel wheels are lockable, great for safety and long stretches of smooth road.
The large shopping basket can carry whatever you need so you can focus on your little one rather than struggling with bags. The no puncture tyres are protected from sharp nails and stones in the road so you won’t be left stranded. They mimic the cushioned ride of an air filled tyre with the benefit of a lighter weight, making it easier to transport.
This pushchair can meet the needs of a growing family with the addition of the Piggy Back ride on board for a toddler.
It comes complete with a raincover, UV protective sunshade and insect net so you can keep them safe whatever the weather. Also included is a bumper bar and car seat adaptor. The car seat adaptors are suitable for the Maxi-Cosi or BeSafe.

0% APR Representative: this product is eligible for Interest Free Credit, available when you spend £1000 or more on selected Nursery products. Call 01698545112, or visit our shops. Terms and conditions apply: find out more

Like most companies, Uppababy was born out of necessity and opportunity.  It all came together when Bob and Lauren Monahan, the co-founders, had their second child.  When they couldn’t find the right baby products, Bob, who had more than 10 years’ experience in the baby industry, had an idea to make a pushchair that would make parents lives easier and better;intuitively designed, stylish and sleek.
Bob didn’t have a 5 year plan but knew that as long as he took one step after another in the right direction, he could create a high performance pushchair that not only met the needs of new parents but let them keep their sense of style.
In the beginning, Bob was the only full time employee with Lauren joining as head of sales a year later.  The company had to sell great products from day one to pay the bills and develop new products.
The story started only ten years ago in Boston, USA, and since then, Uppababy has grown into a company with more than 60 employees in their head office and a global brand with distributors across the globe.  The company still operates with all the flexibility of a small business where every decision is based on what will have the biggest impact for parents. So how did Bob and Lauren come up with the name Uppababy?  Like so many things in life, the answer was right under their noses.  When their daughter was about two years old and wanted to be picked up, she would lift her arms and say ‘’uppa, uppa’’.  Out of the mouths of babes, that’s how Uppababy finally got its name.
More from Uppababy