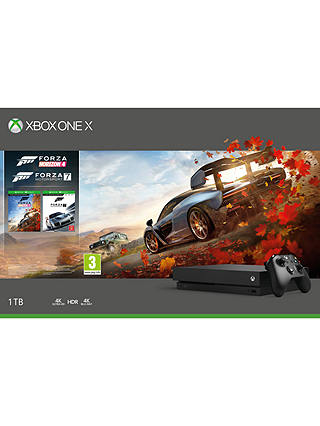 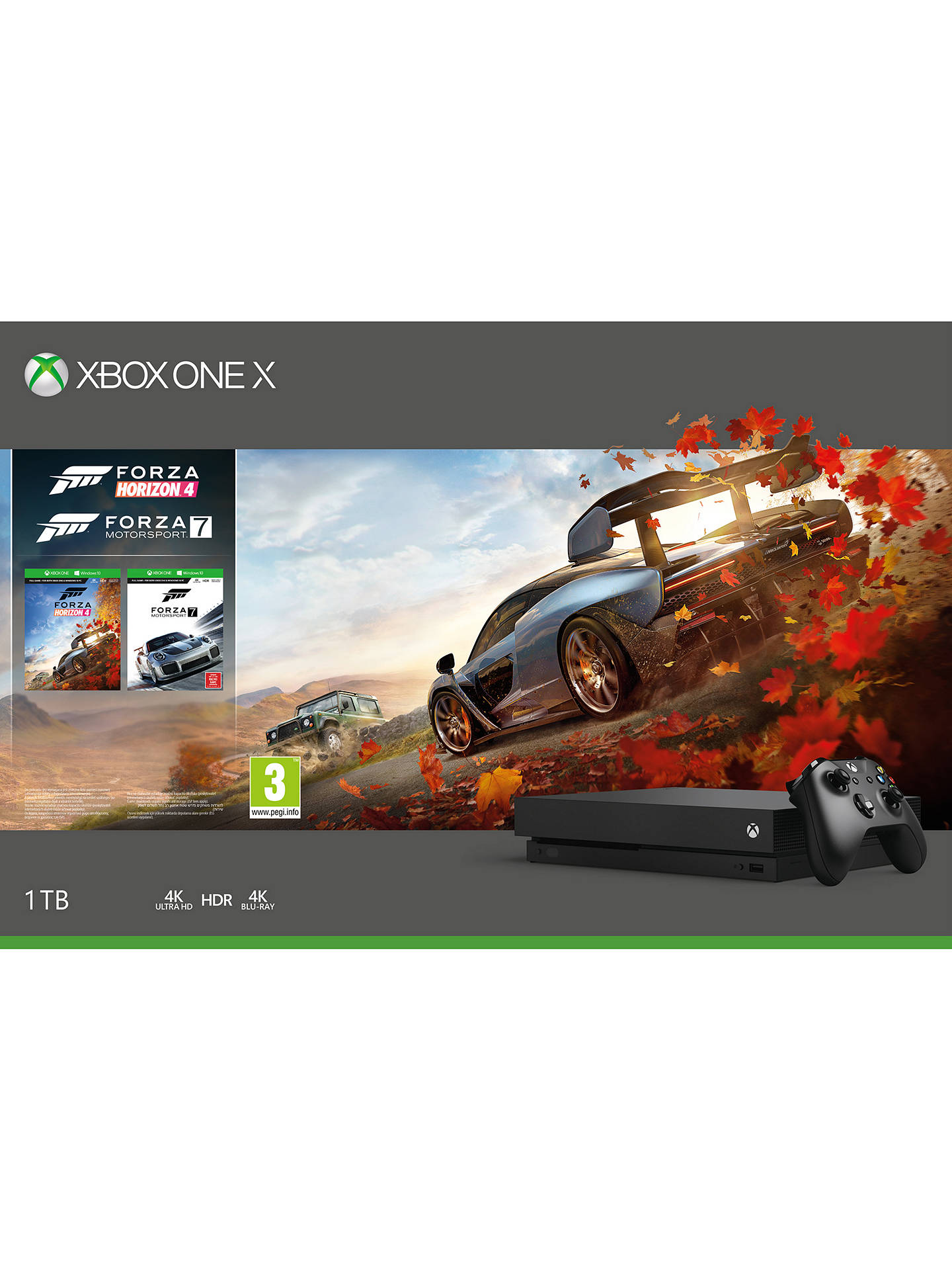 Xbox One X
With 40% more power than the Xbox’s previous incarnation, Xbox One X is now the world’s most powerful console. Plug the Xbox One X into your 4K Ultra HD television and experience immersive true 4K gaming in its full glory, rather than settling for upscaled graphics. Blockbuster titles load quickly, run smoothly and look fantastic – even if you game via a 1080p screen.


Forza Horizon 4 Game
Experience the UK’s beautiful countryside – the calm lakes, the serene valleys and historic castles, along with more lively urban environments, either alone, cooperatively or via the multiplayer option, all in stunning native 4K and HDR – however at breakneck speed thanks to Forza Horizon 4 for the Xbox One.

Enjoy the challenges of driving during a typical summer’s day in the GB at 60fps (frames per second) – so there’s rain, snow and if you’re lucky, a spot of sunshine. Forza Horizon 4’s dynamic seasons technology changes how the game plays. You can unlocking new events and routes, while rain and snow will impact your driving conditions.

Forza Horizon 4 comes supplied with the fan requested Route Creator enabling you to design and share your own custom race routes anywhere in the open world.

Collect over 450 cars from more than 100 licensed manufacturers and for the first time in the Horizon series, players can own property that unlock new items and gameplay perks.


Forza Motorsport 7 Game
Designed to run at 60fps and featuring 4K resolution in HDR (on compatible viewing sources), get ready to immerse yourself in the beauty and danger of competitive racing, with Forza Motorsport 7 – the most comprehensive automotive racing game ever made.

The game includes new leagues and Assists, so beginners need not feel daunted jumping in, or if you prefer viewing races, there’s enhanced spectator modes for you. If you like to tailor your online persona, you’re covered thanks to the game’s massive driver gear collection, spanning decades of race history and pop culture.

Forza Motorsport 7 features over 700 cars, including the largest collection of Ferraris, Lamborghinis and Porsches ever in a racing game. Additionally, race conditions will never be the same thanks to Dynamic Race Weather, so it’s not only a challenge of racing your competitors as the camera shakes and parts rattle; you have to master limited visibility and expanding puddles as well.

There are pre-war cars, NASCAR vehicles, American muscle, trophy trucks, exotic supercars and JDM classics along with 30 racing environments for you to compete on and Forza Motorsport 7 also features a brand new campaign: The Forza Driver’s Cup.