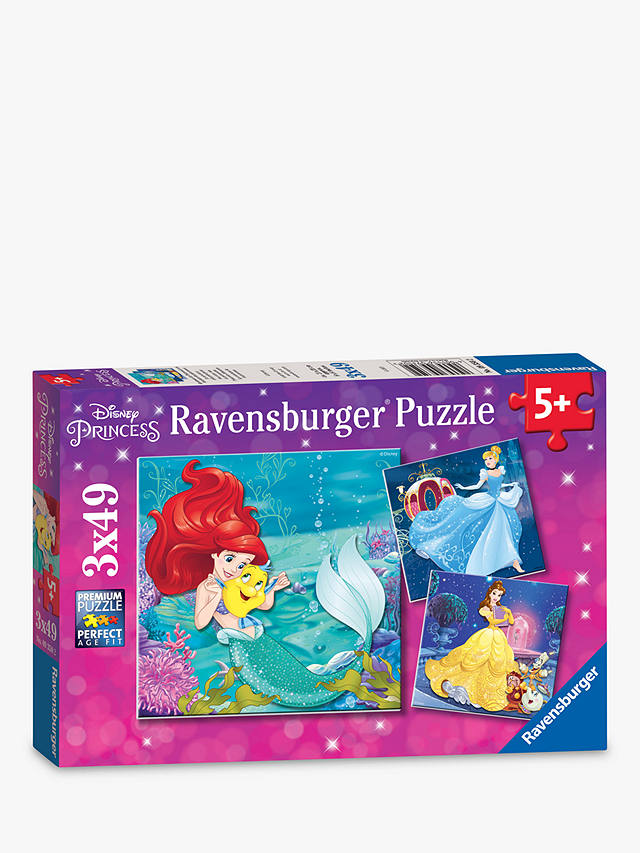 Three colourful Disney Princesses jigsaw puzzles for you to put together. Each of the puzzles feature your favourite characters from Disney Princess, including Cinderella, Merida, Ariel, Rapunzel, Aurora, Snow White, Belle and Tiana.
The 49-piece puzzles are marked on the reverse with a different pattern, so it's easy for you sort them out. Made from strong premium grade cardboard, with linen finish print to minimise glare.

Jigsaws
Material
Cardboard
Model name / number
9402
Number of pieces
147
Number of players
1 or more
Suitable From
5 years
Toy Character
Disney Princess
Warning!
Choking hazard - not suitable for children under 36 months due to small parts that may cause a choking hazard

Walt and Roy Disney founded the ‘Disney Brothers Cartoon Studio’ on 16th October 1923 and it didn’t take them long to establish themselves as leaders in the American animation industry. In later years, they branched out beyond this realm into live-action film production, television, and travel. The company is best known for its output from the infamous Walt Disney Studios, which is one of the largest and best-known studios in Hollywood today.
They have a whole host of unforgettable characters under their belt that kids fall in love with generation after generation. The best known of the lot is probably Mickey Mouse, who is the official mascot for the company. However, the various Disney Princesses give him a run for his money, having become role models for many young girls over the years.
More from Ravensburger