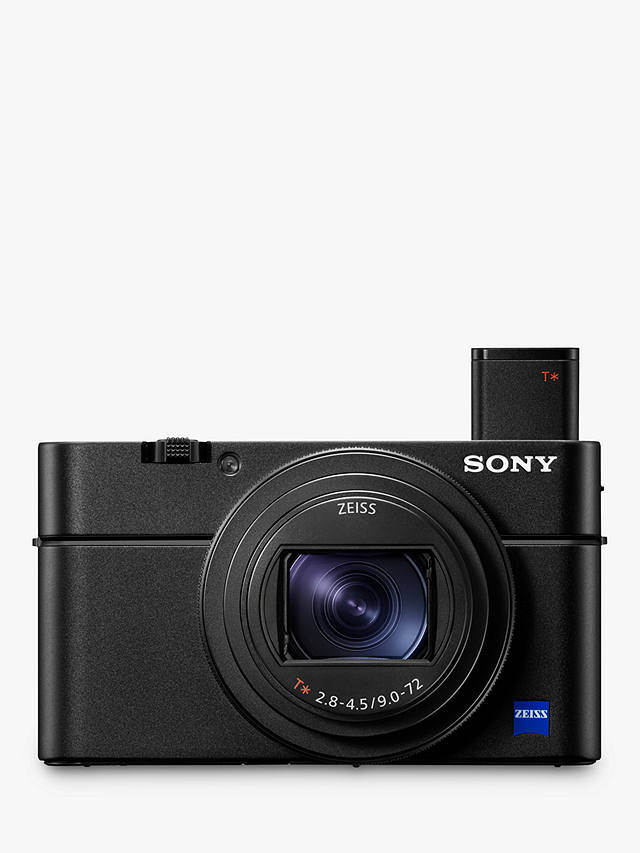 Claim £100 E-Gift Card when you buy this product

Find out more about the offer

The ultra compact RX100 Mark VII combines a broad 24-200mm zoom range with amazing autofocus capability. It inherits the RX100 series’ renowned sensor, can shoot continuously at 20 frames per second, or up to 90 frames per second in single burst shooting mode and has 4K movie resolution supporting HDR. New to the VII is Real-time tracking, to maintain a sharp and steady focus and an external microphone jack making it great for vloggers wanting to capture professional-level audio. And all in a pocket-sized body that's ideal for top-quality photography on the go.

Real-time Tracking
It’s the first of the RX100 series to support Real-time tracking so fast-moving subjects can be captured with as much clarity as non-moving subjects. Real-time Eye AF has been improved to detect and focus on your subject's eyes even if obscured, backlit, or looking down, and Real-time Eye tracking does the same for movie recordings.

Continuous Shooting
Take pictures at up to 20 frames per second burst shooting to nail that precise split-second image, with Blackout-free shooting and full AF/AE tracking. With Single Burst Shooting mode you can take seven still shots in rapid succession at up to 90 frames per second.

Super SloMo
Record dramatic super slow-motion video at up to 1000 frames per second. Then playback your footage from 1/4 to 1/40th of real-time.

OLED Viewfinder
Accessible at the touch of a button, the retractable viewfinder relays the frame with 2.35 million dot resolution.

180° Tilting Touch Screen
Shoot high-quality selfies and more dynamic angles with ease, with a 3" tiltable touch screen, tilting 180 degrees up and 90 degrees down.

Ultra Compact Body
All this photography power within the compact body that the RX100 series is renowned for.

The amount of frames per second that can be shot in continuous shooting mode, useful for fast moving subjects

Can connect to a compatible digital camera to print without the need to use a computer.

Automatically detects faces and optimises focus, so they're the main subject of a snap

Allows your camera to detect and record where a picture is taken, perfect for holiday snaps

Measures the lens' light exposure. This affects the depth of field (the distance beween the nearest and furthest objects that can be kept in focus)

The distance from the sensor and the optical centre of the lens when focused to infinity. A smaller focal length will generally result in a wider angle of view

Defines the sensor's light sensitivity and therefore performance in low light settings. Greater ISO numbers indicate more light sensitivity, though may lead to more grain or noise in the image

Delays taking the picture for a few seconds, ideal for self portraits or group pictures

The amount of time is takes for the shutter to open and close. High speed lets you freeze action completely, slower ones allow motion blur

The interface you look through to compose and focus your picture. Not all modern digital cameras will feature a physical viewfinder as well

Enlarges video captured by the optical zoom and makes it seem even closer. This involves zooming in on an existing image, so it gives slightly less detailed results than an equivalent optical zoom

Allows you to zoom the image closer to the subject. Optical zooms feature physically moving lens components, so it maintains the image quality as you zoom in. Digitial zooms essentially crop an existing image, so may lose image quality as they zoom in