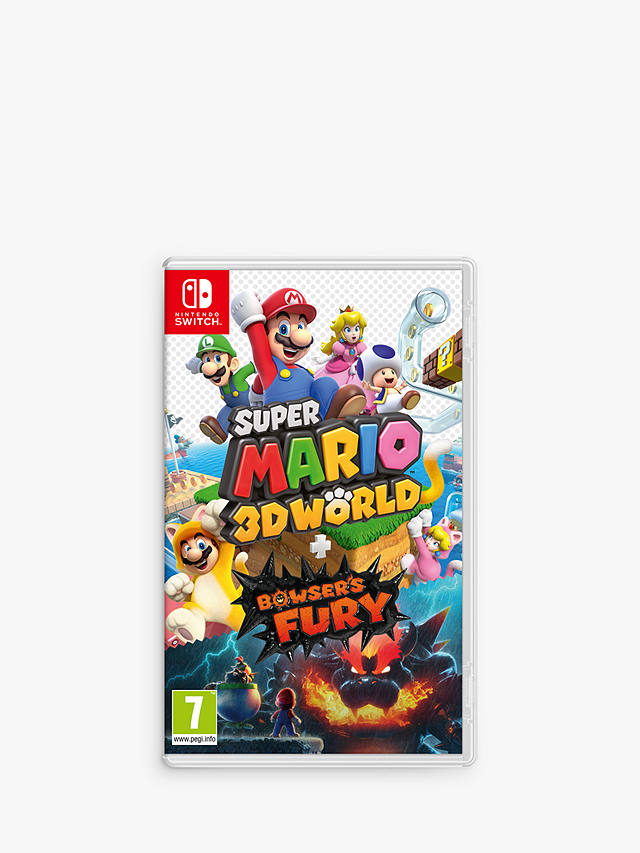 Get ready to be the cat’s whiskers as you join Mario, Luigi, Princess Peach and Toad on a quest to save the Sprixie Kingdom in Super Mario 3D World and Bowser’s Fury – purr-fectly pouncing onto your Nintendo Switch.

Bowser’s kidnapped the Sprixie Princess, and it’s up to you and our heroes to rescue her! Super Mario 3D World and Bowser’s Fury feature the same great co-op gameplay, creative levels and power-ups as the original game, but now with exciting added improvements.

In Super Mario 3D World, Mario, Luigi, Peach, and Toad all have a distinct play style: Luigi can jump extra high and Peach can float for a short time, and as an extra treat, Rosalina is even available as a playable character later in the game.

In Bowser’s Fury, Mario arrives on Lake Lapcat and is confronted with a catastrophe! There’s a rampaging Bowser on the loose, so you’d better join forces with Bowser Jr. and venture through an interconnected world made of cat-themed…well, everything. Enemies, flowers, and even birds take on a feline form.

Need some extra assistance bringing Bowser out of his frenzied, fur-ious state? Thanks to local co-op play, another player can take control of Bowser Jr. and assist by attacking enemies and storing power-ups. After all, two sets of claws are better than one.


Please be aware: a Nintendo Switch Online membership is required for online gaming.

Collect your delivery from over 7000 local convenience shops within 3 days. Order before 6pm Sunday - Friday for collection the next day.

Delivery on the day of your choice, 7.30am - 6pm, 7 days a week. Order by 6pm for delivery the next day. You'll receive a text on the morning of delivery with a 1-hour delivery window.