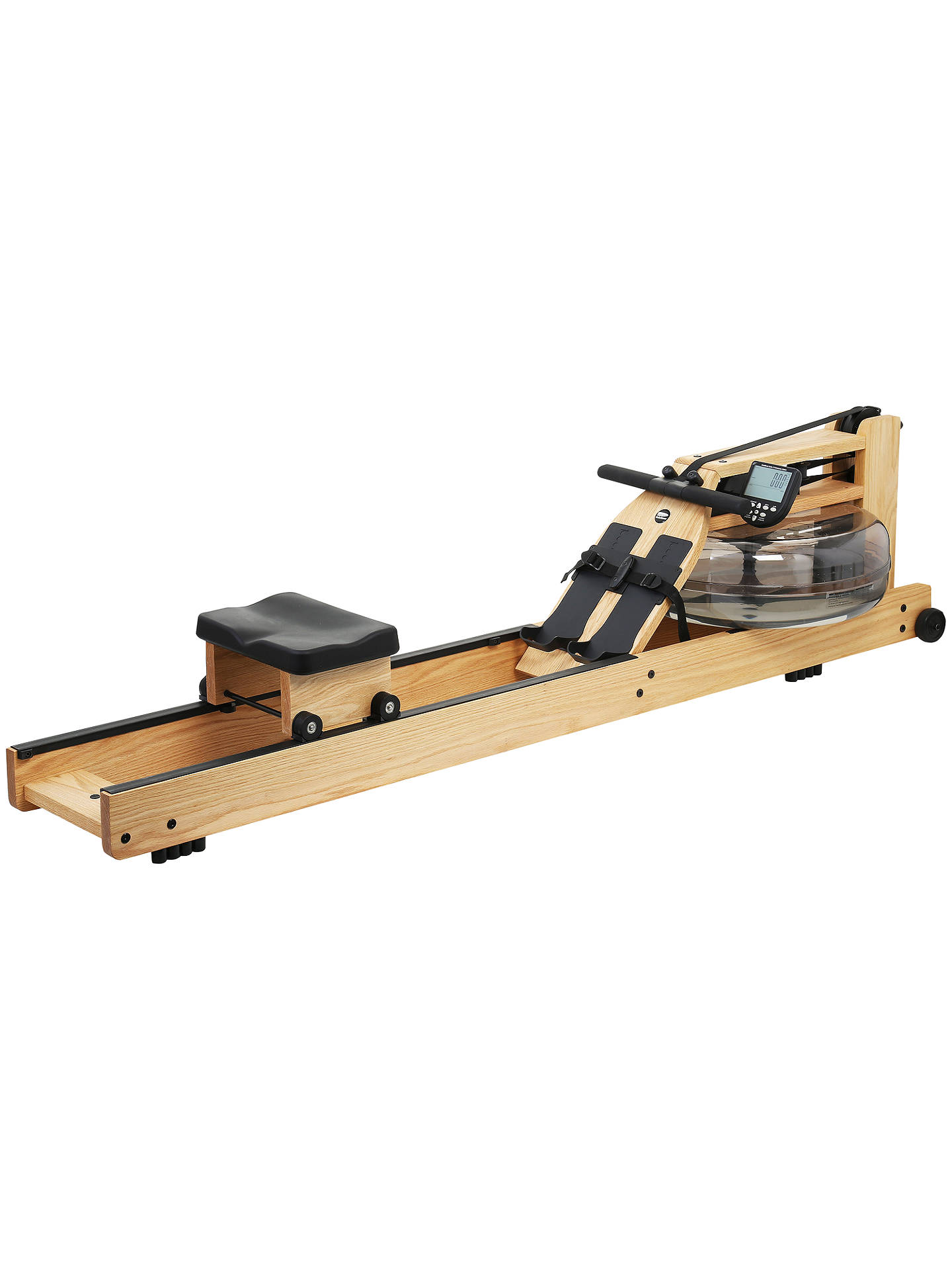 The art and tranquillity of rowing bought into a domestic setting. No magnetic or artificial resistance; just natural movement that harnesses the raw power of water to bring you a more organic rowing experience.

Designed as a natural rowing simulator, authenticity is at the heart of WaterRower's designs. Their patented WaterFlywheel utilises the same physical elements (water) and the physical dynamics (fluid drag) that occur when a boat moves through water, using up to 84% of your total muscle mass in every stroke and giving you the calming feel of a boat gliding down the river.

Unlike other rowing machines, the water flywheel also makes resistance self-regulating; there is no need for artificial adjustment. The result: fluid rowing and an aesthetically mirrored experience that matches the feel, sound, and body benefits of rowing on the river.

Harvested from replenishable forests to combat ecological concerns, each and every WaterRower is meticulously handcrafted in the United States with the same care and precision as the first machine that rolled off the production line 25 years ago. Its solid oak structure is hand finished with Danish oil to give a deep lustre and warmth to the wood.

WaterRower's commitment to using solid Oak comes not only from its incredible longevity and dimensional stability but its functional engineering properties too. Its ability to absorb sound and vibration enhance the rower's quietness and smoothness of use.

Weighing in at less than 50kg, the WaterRower can be stood up vertically for space saving storage when not in use. The wheels on the front of the machine allow for the easy transportation around the home or gym, taking up no more room than a dining room chair.

The S4 monitor also comes compatible with WaterRower's We-Row app, where you can store training data, race online against others, or try better times from previous training sessions. Simply connect up to a PC using the USB cable, open We-Row, and enjoy an augmented experience as the software tracks your training and recommends future workouts to keep you heading in the right direction.

Training programmes and/or software updates available to download via the Internet, a USB connection and/or an SD card

Used to measure effects of a period of work or exercise. Measured as calories expended while excercising

Upright - Similar cardiovascular and lower body workout that real bicycles provide; Recumbent - Rider is partially reclined with bike pedals in front of the seat instead of below; Indoor - Mechanical components are closer to those of real bicycles

WaterRower was founded in 1988 by U.S. national team rower and Yale engineering professor John Duke. Duke’s vision was to create a rowing machine that simulates the resistance and feeling of a rowing boat gliding through the water.

Widely regarded as the most realistic rowing simulator on the market, WaterRower’s unique WaterFlywheel uses water resistance to replicate the dynamics of a moving boat.

All WaterRower machines are handmade in the U.S. at the brand’s New England factory in Warren, Rhode Island, where the company was founded. All wooden models are crafted from the finest Appalachian hardwoods, sourced only from replenishable forests.

WaterRower has won many design accolades for its smart fusion of aesthetics and functionality and has been featured at the London Museum of Design, and New York Museum of Modern Art.

UK delivery by our supplier within 8 weeks.

Where delivery needs to be arranged, you will be contacted to arrange a date and time that's convenient for you.